For Love of the Game

Watched my grandson's high school football Friday night, good game. Amateur sports, what fun and they play for the love of the game. What a concept.
Posted by From the Recliner at 5:25 PM 3 comments:

Liberty Bell, How to Ring It

Several years ago I was visiting the city of Philadelphia and had the opportunity to see the Liberty Bell and even touch it. I don't know if I have ever felt more patriotic. When I think of our history and all the Bell represents it is really magical. America's struggle for freedom is never over. Not only did it need to be won, it must also be defended with relentless vigilance.
The following is some historical perspective on the Liberty Bell usahistory.org
"Inscribed on the Bell is the quotation from Leviticus 25:10 "....proclaim liberty throughout all the land unto all the inhabitants thereof..."
Though it was rang many times it's most resonant tolling was on July 8, 1776, when it summoned the citizenry for the reading of the Declaration of Independence produced by the Second Continental Congress."
But then it became silent
"There is widespread disagreement about when the first crack appeared on the Bell. Hair-line cracks on bells were bored out to prevent expansion. However, it is agreed that the final expansion of the crack which rendered the Bell unringable was on Washington's Birthday in 1846.

The Philadelphia Public Ledger takes up the story in its February 26, 1846 publication:

"The old Independence Bell rang its last clear note on Monday last in honor of the birthday of Washington and now hangs in the great city steeple irreparably cracked and dumb. It had been cracked before but was set in order of that day by having the edges of the fracture filed so as not to vibrate against each other ... It gave out clear notes and loud, and appeared to be in excellent condition until noon, when it received a sort of compound fracture in a zig-zag direction through one of its sides which put it completely out of tune and left it a mere wreck of what it was." 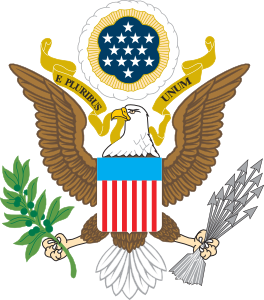 "On the backs of our gold coins, the silver dollar, the half dollar and the quarter, we see an eagle with outspread wings. On the Great Seal of the United States and in many places which are exponents of our nation's authority we see the same emblem.
The eagle represents freedom. Living as he does on the tops of lofty mountains, amid the solitary grandeur of Nature, he has unlimited freedom, whether with strong pinions he sweeps into the valleys below, or upward into the boundless spaces beyond.

The Eagle became the National emblem in 1782 when the great seal of the United States was adopted. The Great Seal shows a wide-spread eagle, faced front, having on his breast a shield with thirteen perpendicular red and white stripes, surmounted by a blue field with the same number of stars. In his right talon the eagle holds an olive branch, in his left a bundle of thirteen arrows, and in his beak he carries a scroll inscribed with the motto: "E Pluribus Unum."

I love America. I pray for America. I celebrate the grace of God in blessing America. And sometimes I weep for America (911). I will always be true to the Biblical values and principles on which America was founded.

Elections are just around the corner so let me share an acrostic which government leaders and all who seek office should commit themselves to. FREEDOM is the heart of the issue and understanding the accountability it requires.
Faithful to the Constitution
Responsive to the People
Efficient in their Service
Examples in Humility
Diligent in the management of their Office
Observant to the Principles on which our Nation was founded
Mindful of the Providence of God
God Bless America!!!

Posted by From the Recliner at 9:31 PM 4 comments: